Posted at 11:16h in SEO by Internet República
0 Likes

The world of Apps is growing at an incredible pace. This very week we learned that the company ActiVision Blizzard had purchased King Digital, the creator of Candy Crush, for 5.3 billion euro, which is not surprising considering that Candy Crush today has around 500 million players every month.

It is not the first time that we see a financial movement like this: Mark Zuckerberg purchased WhatsApp for 16 billion euro.

Since we do not have savings enough to buy a successful app like this yet, we will show you some steps to reach a good apps optimization in markets.

ASO (App Store Optimization) is the process of optimizing a mobile app with the goal of improving the positioning in the rankings of the apps stores when a user makes a search, and therefore reach higher presence and a greater number of downloads.

Today Google Play Store hosts more than 1.5 million apps, whereas the App Store has around 4 million apps, so it is crucial to optimise our mobile app to be beyond the competition. How to do that?

ASO is divided into On-metadata and Off-metadata actions:

All these actions have a direct impact in both the search as well as the ranking and the conversion: 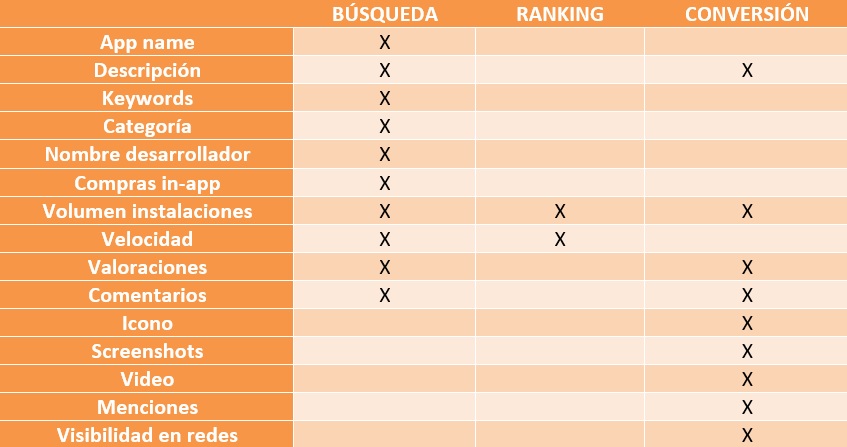 It is also very important to track and analyse the whole process. For this you can use some ASO tools such as:

Sensor Tower: To analyse the ranking of the keywords that you are competing with for your app.

APP Snippet Preview: This tool is for previewing your configurations and making simulations of apps datasheet before you launch them.

Tune: One of the best tools to control the ranking of your apps. It tracks keywords, competition analysis, etc.

Follow these recommendations and your app will get a higher ranking in markets.

To learn all the secrets for indexing Google apps read the following steps for configuring app indexing on Android.