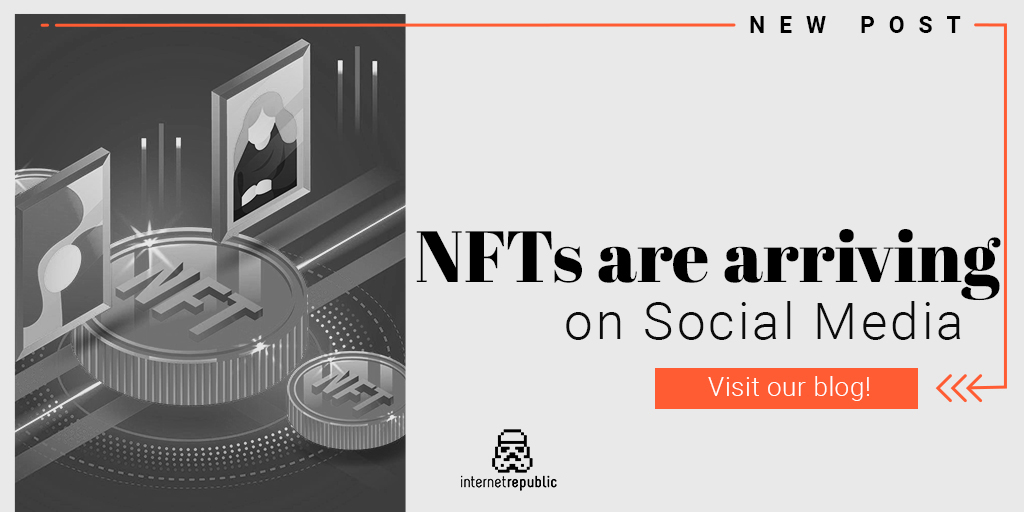 NFTs ARE ARRIVING ON SOCIAL MEDIA

Posted at 15:39h in Uncategorized by Internet República
0 Likes

Surely you have heard and read these acronyms countless times over the last year, but do you know what they mean? Or do you simply think it’s associated with all these new terms around the Metaverse, cryptocurrencies, and other stuff?

BREAKING NEWS The Collins Word of the Year is… NFT.

The acronym NFT comes from ‘Non-Fungible Token’, which refers to a digital asset that is neither consumable nor replaceable by anything else.

Its definition is as follows: ‘it’s a unique digital certificate, recorded on a blockchain, which is used to register ownership of an asset such as a work of art or a collectable. A blockchain is a technology that allows us to transfer digital data with absolute security, ’

An NFT can be an image, chart, video, music or any other digital content that someone wants to own.

So, we could think of NFTs as artworks brought to the digital world. The price of these artworks is what users want to give to them. They can cost millions, as in the case of the first tweet issued by the CEO of Twitter, which reached 3 million dollars in its sale.

just setting up my twttr

Zoe says she plans to use proceeds from sale of 2005 image of her smirking in front of burning house to pay student loans#DisasterGirl #ZoeRoth pic.twitter.com/MIBGecGOKK

When purchasing an NFT, the owner is given a unique number by which he/she becomes the owner of the copyright of the artwork. This number records both the initial value and the transactions that have taken place.

The popularity of NFTs is growing parallel to the Metaverse.

Mark Zuckerberg announced the arrival of the Metaverse as a space where physical reality and virtual reality converge in a new ecosystem where the user can perform all kinds of transactions and interactions. From a business, leisure, entertainment or learning point of view. In other words, the ambitious goal of the founder of Facebook is that we live in this virtual reality and break the thin barrier that separates it from physical reality.

We can shop for clothes or objects for our virtual character and after, enter a restaurant to order food online and without leaving the metaverse. This food will be brought to your home by a delivery person, combining the two realities into one, and opening up a world of possibilities for new relationships between brands and users.

And it is in this scenario that cryptocurrencies and NFTs fit perfectly as a means through which users can acquire products and services in this new universe.

Through NFTs, users can acquire (through their avatars) different objects such as houses, land, artworks, and unlimited items whose ownership is unique and unrepeatable, as mentioned above.

NFTs are making their way into social media. The popularity of these tokens hasn’t gone unnoticed by the major platforms. Right now, they are already working to learn how to introduce them into their own features.

Twitter recently announced the arrival of NFT’s as profile images to its platform. The social network begins testing so that its users can verify and use the NFTs in their personal profiles from its Twitter Blue service.

You asked (a lot), so we made it. Now rolling out in Labs: NFT Profile Pictures on iOS pic.twitter.com/HFyspS4cQW

👉🏻 And what about you? Do you think you will ever acquire these NFTs in the metaverse?