Posted at 12:28h in SEO by Internet República
0 Likes

A lot has been written lately-and not always accurately-about how would the update of Google on April, 21st affect the rankings of mobile searches. Therefore, the purpose of this document is to shed light on that update and clarify the hoaxes that have been spread recently.

The first thing to take into account is that Google has been making changes on its algorithm in this sense for some time now, and if a website is not properly adapted for mobile devices, it is being banned in the rankings of searches via mobile.

What is the best way to optimize a website for mobile devices?

These are the best options to optimize a website for mobile devices:

Of these two options, the most recommendable is to use responsive design, since it is easy to implement and maintain and it is the format that Google interprets best.

On the other hand, choosing the second option allows us to optimize a lot better the content that is sent to mobile devices, but this can prove more problematic because of the complexity in implementation. Therefore, this option is not recommendable unless we are very clear about the effort needed to carry it out weighed against the potential benefits.

There is also the possibility to serve dynamically, with the same URL but different HTML depending on the device that requests that URL. However, this is not recommended in this case, because in some cases Google can misinterpret it as cloaking, affecting the rankings negatively.

This guide developed by Google shows all the details to bear in mind when performing these implementations.

If I do not have a website optimised, will Google stop displaying me?

No way. The change is exclusively for searches on mobile devices and it does not affect neither tablets nor computers (whether desktop or laptops).

If in mobile searches the result includes the text “Mobile-friendly”, the change will not affect me 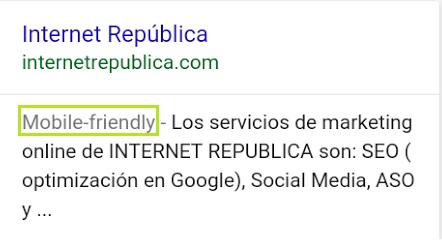 This assertion is also false, because although Google can indicate on its search results that a website is optimized for mobile devices, the web can still have errors which will be penalised from next Tuesday, April 21st. The main of these errors appear under implementations with mobile version that is located in a subdomain different to the main one. These are:

The element that has gone most unnoticed and which will have a considerable impact on the searches in Android devices is the ranking of the apps installed by users. This implementation will make that Google considers if a user has installed an application while logged on on his or her Google account as a criteria for ranking.

Therefore, if we have an application it is very important to implement deep linking so that Google can index it, thus the application will benefit from this functionality. Here you can read in more depth about this.