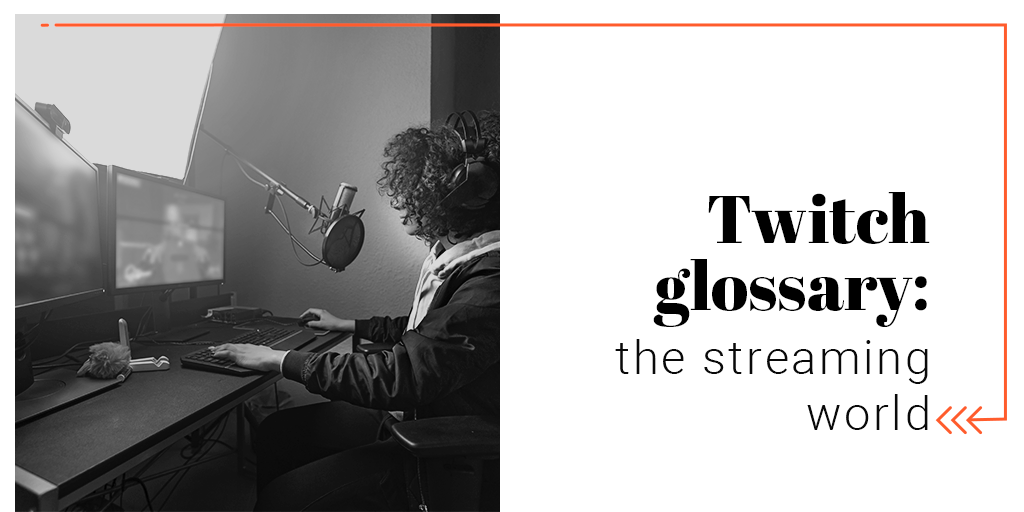 Did you know which expressions are the most used in the streamer world?

Twitch is a live video platform that was born with it’s focus on video games. If you’re familiar with e-sports, you probably already know Twitch. If not, the first thing you need to know is that it’s a place where you can find recorded games played by users live, e-sports and other different events related.

Twitch is the social network that so-called ‘gamers’ use and with time, it has evolved and included all kinds of other subjects. Music, life-styles, sports, cooking recipes…pretty much anything you can think about.

Video Games were born as entertainment, since then it’s become the main product of an industry that generates millions a year, and the most surprising part is that it doesn’t seem to stop growing. It’s even adding new terms to our language and if you want to stay in tune with everything new going on, then you must add this slang to your vocabulary.

IF YOU ENJOY BEING UPDATED ON THE LATEST TRENDS, THEN YOU MUST TAKE A LOOK AT THE SLANG USED BY STREAMERS. THESE ARE THE MOST USED WORDS, AND THEY ARE STARTING TO BE OFFICIAL TERMS FOR DIFFERENT SITUATIONS.

AFK. It’s the abbreviation for ‘Away From Keyboard’, a command that is used to warn that you aren’t nearby the computer or that you are ‘not available’ at that moment, maybe because you’re offline.

TO BAN (someone): The platform allows you to punish a user or a content creator for ignoring the site’s rules and it prevents them from entering. It’s rather effective. Twitch can be quite restrictive when it comes to using certain words or content during live streams and it usually bans any kind of explicit sexual content, nudidity, incitement to violence and other related stuff.

BRB:If you see this message in any chat, don’t worry, it means “Be Right Back”. It’s similar to AFK (Away From Keyboard). It can be used if you leave the computer and go to the kitchen to get a drink, so you let people know you’re not available at that exact moment.

CASTER: a caster is the person who narrates or transmits any live E-sport stream to an audience. A Caster has the same tasks in the E-sports world that a commentator would have in the sports world.

CHEERSMOTES: when you send ‘cheers’ to your favorite streamer, you can choose emojis to attach as an ‘envelope’ for the bits. These can be gems 💎, faces 🤩, hearts 🧡… The more bits you send, the more you can decorate the message.

COMMUNITY: Every streamer ends up developing a community of people that follows that certain content he/she produces. That community is the streamers audience: followers.

DROPS: It’s another reward system inside Twitch and it connects game-developers with streamers. Prizes like aesthetic elements for certain games, in-game money, or other elements developers want to reward streamers with. This usually takes place live during the retransmision.

EMOTES: stickers or reduced-size pictures that function as emojis. On Twitch we can find a good selection of emojis available to all users, and then you have the premium ones, exclusive to subscribers or certain communities.

F: if used inside a chat, it means you are paying your condolences to another player, for something that happened. It’s usually used in a sarcastic way. This term was born during live Call of Duty games, and when a player occasionally ‘suffered’ a funny death, typing ‘F’ was a way of joking about it.

FF: it’s short for ‘Failed Fight’ and it’s used for bragging to another player about the result of some game. It’s used in a sarcastic way.

FOLLOWER: It’s any viewer that attends a channel regularly. If the user has the ‘notifications’ enabled for that channel, when the streamer goes online, it will get a warning.

GG: It’s the opposite to ‘FF’. When a game has finished, you can congratulate your team members or other players by saying ‘GG’ (Good Game). Good game, well-played, well done.

HOST: It’s one of Twitch’s tools to incite team ups between content creators.  A streamer can ‘host’ another content creators stream while they are not online, this way you help them gain viewers and their channel isn’t empty of content when they’re offline.

IRL: ‘In Real Life’ is a kind of Twitch channel where streamers share their life in real time. A day at work, a stroll, what they are eating, their habits, and other stuff.

KAPPA: It’s a black and white emoji of Josh DeSeno’s face, a member of Justin TV, a platform from where Twitch came from. He worked on the chat’s creation, and it’s used to indicate that a comment was irónic.

HYPE TRAIN: another platform tool that supports creators and also provides benefits for viewers. It’s created when a channel gets a lot of donations, or big quantities of bits donated and subscriptions. It happens during a live stream. The Hype Train is a count-down for any viewers that want to support their favorite streamer with a donation and if they do and help reach a mark established by the content creator, they get rewarded with limited emotes.

TRY-HARDING: It’s gaming-slang for ‘playing-to-win’, creating an elaborate plan, and ‘giving it your all’ to fulfil an objective.

MODERATOR (MOD): also known as ‘mods’, it’s someone who ensures that the chats rules are being followed and applied. They are normal users that “cleanse” the chat from anything unnecessary like spam or inadequate language. They can be identified by a green symbol with a sword on it.

OWNED or PWNED: it’s used to humiliate another player in-game

PRIME GAMING: It’s an exclusive offer for Amazon Prime subscribers. They are allowed to connect their Twitch and Amazon account to gain extra benefits and rewards. One of the advantages is a one free subscription every month to any channel you want, access to videogames and other exclusive items.

ROLEPLAY: It’s a way of playing inside any game. So-called role-playing games are characteristic for players trying to play with their character’s features. It’s like acting, but inside the game.It’s attractive to players because it helps them feel like they are really inside the game.

ROLE-PLAYING: It’s the process of creating and playing a character with certain attributes developed by the user.

RAID: another tool used inside the platform to show support between streamers. Once a stream has ended, the content creator motivates his viewers to go to another streamer’s channel.

SET-UP: workplace and working tool for every streamer. It can be something small as a computer, but It can also be an entire room. So we can refer to “set up” when we are speaking about the place where a streamer works.

SUSCRIPTOR: a viewer that not only follows your channel, but also shows support by paying monthly for the content they consume. There’s three levels of subscription, each one with its own prices validated by the platform and rewards selected by the streamers. Some of these benefits are: consuming content without going through ads, access to the ‘subscribers chat’, quick scroll chat, or exclusive content made only for those who acquire the subscription. Twitch also gives you the choice to give away a monthly subscription to another user, and you can even choose how much time he will have it. A streamer can also choose to randomly send a reward with these attributes to the people of the chat, so someone lucky gets it.

VIEWER: It’s the main way of finding out the success of every stream, because it’s the number of viewers it’s had. These users don’t have to be followers or subscribers of any of your channels, it’s more like the sum of people that enter the stream at some point to watch.

WHISPER: It’s the main way of sending private messages on Twitch. There is an inside-chat-command that allows you to send a private text to one of the other users without the rest seeing it.

YOLO: short for “You Only Live Once”. In the gamer world you can occasionally see another player risk his ‘in-game life’ or match by doing something reckless or unnecessary, at which point you will probably hear them say ‘YOLO’, or other players will, if they come aware of the outcome and find it funny.